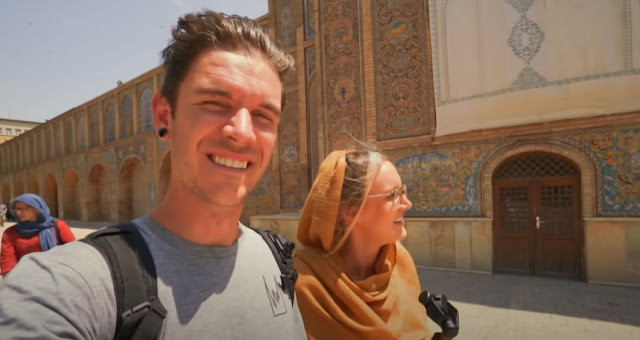 Barry couple Craig and Aimee (pictured above) are award-winning travel vloggers who have more than 160,000 subscribers on their YouTube channel 'Kinging- It', where they account (almost) every movement of their incredible travels across the world.
In 2018, the same year they were recognised as 'travel influencers of the year', the Welsh duo embarked on a remarkable 'Mongol Rally' adventure across Eastern Europe and Western Asia, including a week in Iran.
You can watch their adventures in Iran over six videos - 80 minutes - below.
Video one: Craig and Aimee cross the border from Armenia to Iran, but how is it crossing the border? And after eventually entering the country, how was the travel to Tabriz?
Video two: Adjusting to the hot weather and clothing rules, and finding out how friendly Iranians really are, Craig and Aimee leave Tabriz and onto smaller towns with cultural hotspots.
Video three: The couple embark on a long trek to Tehran, but before arriving at the capital, Craig and Aimee visit a castle ruin and enjoy local village cuisine.
Video four: Seeing what Tehran has to offer, Craig and Aimee head to the gorgeous Golestan Palace, or 'like Mariah Carey's house' as Aimee calls it. Later they get lost in a bazaar and then go on a quest to find a restaurant with vegetarian meals (i.e. more than just rice and tomatoes).
Video five: Craig and Aimee leave Tehran and head towards the Turkmenistan border. Before that, they experience being stopped by the police - standard, random checks for foreign tourists - and having their car seen to, again.
Video six: The hospitality, the scenery and serenity; Craig and Aimee reflect on their 'emotional' time in Iran and they pay tribute to their guide, Rashed, who seems a joy. "You feel like you've come home," Aimee poignantly says.
You can see the genuine love and fascination both Craig and Aimee have for Iran, and for those who watched these videos and never visited the country, it does feel as though you have now.