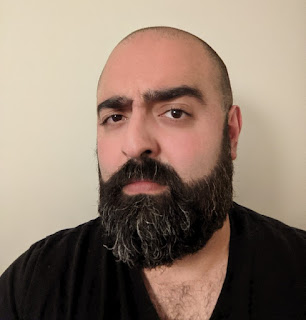 In 1985 I fled Iran. Mum, dad, myself and my six-month-old brother spent several months in essentially a refugee camp in Turkey.

I remember Iran. I remember hiding during bombing raids. It was made into a game so I don’t remember it as a frightening experience. But I do remember hiding in a small room with my then very pregnant mother and my grandmother. That’s one of my earliest memories.

And then I remember Turkey. It was a hard time, but it was alright because there were lots of Iranian refugees there and there was a sense of community; along with a lot of apprehension about what was happening in the war at home and how things were going to progress for the future.

We were relatively lucky because we had family in the UK already, before any of the fighting started, including aunts and uncles who had been in university and now had jobs in the UK. With the help of the UN, we were flown to the UK and we basically had £100 between a family of four and one suitcase of clothes when we arrived.

We stayed with family for a bit and then managed to get a council house, which was amazing at the time. That was in Plymouth.

My parents kept us fed and watered and clothed. They were young, only in their 20s, so I don’t know how they coped. My dad worked very hard in my uncle’s business – he had several fast food restaurants.

My mum was pretty much a full time carer to my brother, who shortly after coming here was diagnosed with quite severe autism.

Then we moved from Plymouth to Tiverton in Mid Devon, where I managed to get into quite a good school, a public school, with the help of an assisted placement grant – essentially a scholarship.

When it came to choosing a university, there are no doctors in my family, but from when I was younger – perhaps it’s the stereotype of an Asian family - they wanted me to be a doctor. But I also wanted to be a doctor. I never really thought about anything else as a potential career for myself.

So, when I got the grades to get into Medical School in Cardiff, I thought it was amazing and I had a great five years there. I met my girlfriend there, who then became my wife after several years of pestering! Still in Cardiff, we’ve got three kids – two girls and a boy, who all go to a Welsh speaking school and love tahdig and zereshk polo - and a home. My family’s still around and everything’s settled. Life is good.

Working in the NHS I kind of see myself almost like a public servant. It’s nice to be able to give back in my own way – a little bit to the country that took such good care of us when we needed it most.

Most of the original quotes here are published on Health in Wales (Swansea Bay University Health Board), approved to be used by both organisation and Dr Farbod himself.